Skip to main content
You have permission to edit this article.
Edit
Home
e-Edition
News
Diversions
Columnists
Multimedia
Obituaries
Classifieds
Share This
1 of 12 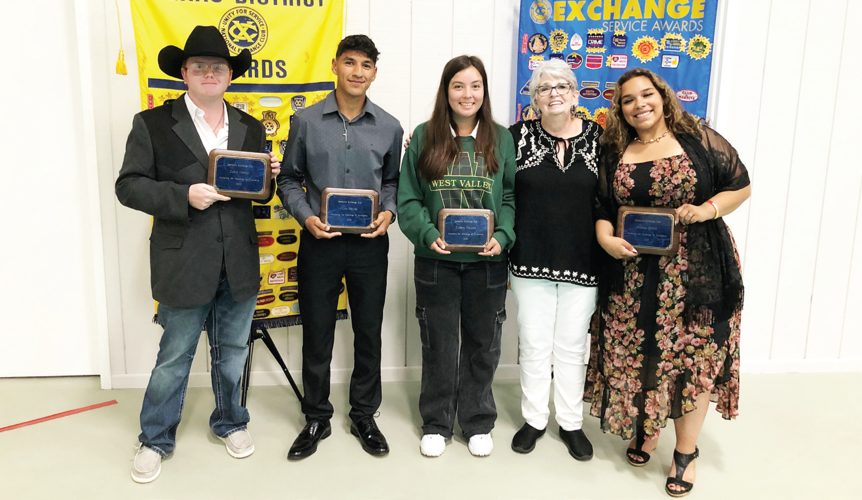 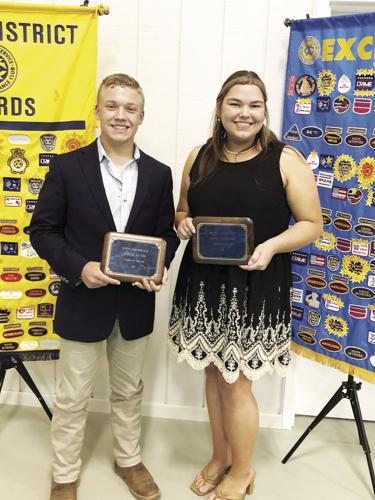 Cooper Sutton and Hailey Lunesmann were named Students of the Year at the Gatesville Exchange Club Golden Deeds Banquet on April 25. 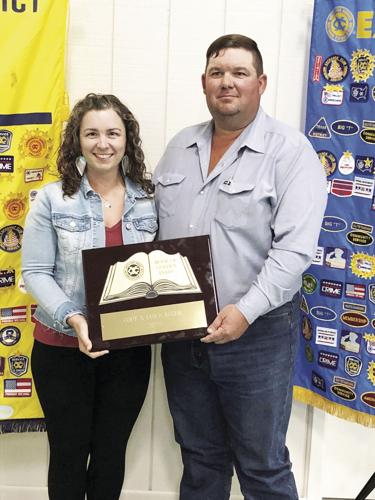 Erika and Cody Archie were honored with the Book of Golden Deeds Award for their numerous volunteer and community service endeavors during the Gatesville Exchange Club Golden Deeds Banquet on April 25. 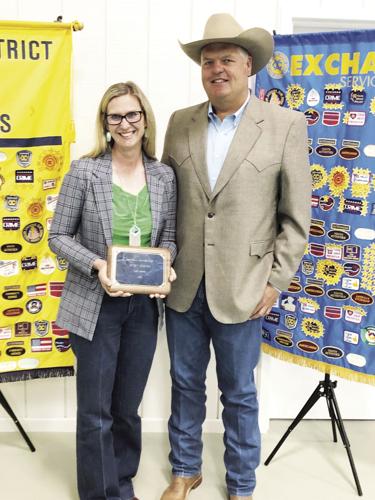 The Gatesville Exchange Club's Care Award went to Becky Coward, pictured with her husband Will, at the Golden Deeds Banquet on Aopril 25. 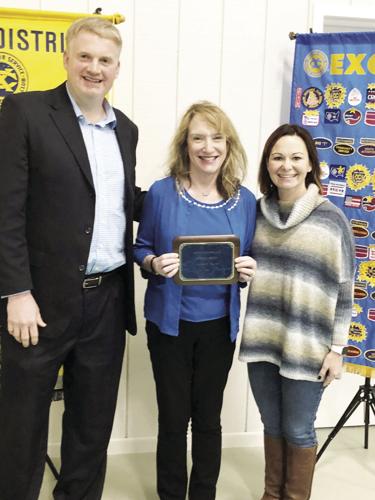 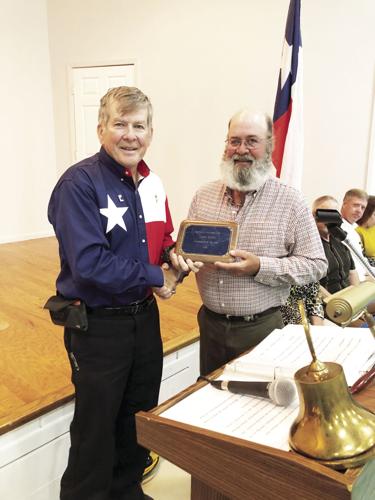 Clark Burns, right, was honored as the Exchageite of the Year during the Gatesville Exchange Club's Golden Deeds Banquet on April 25. Pictured with him is Exchange Club President Alan Mathis. 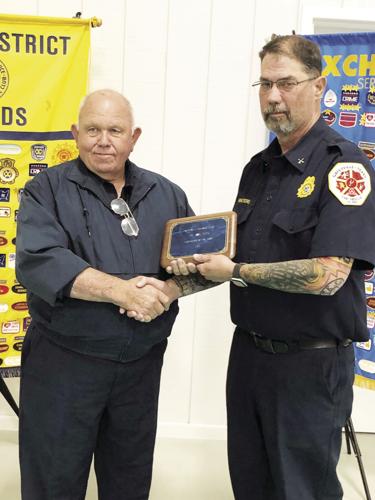 Lee Walters, right, was presented with the Firefighter of the Year Award at the Gatesville Exchange Club Golden Deeds Banquet on April 25. Pictured with him is Gatesville Fire Chief Billy Vaden. 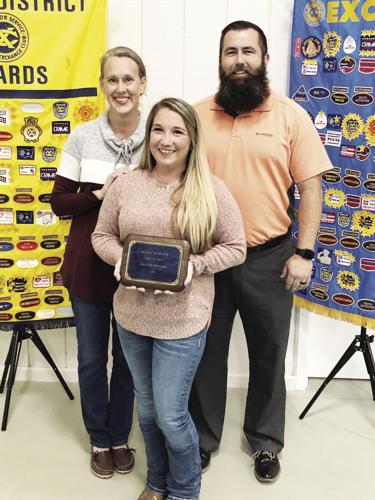 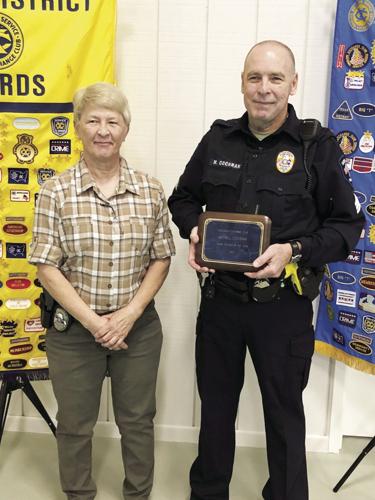 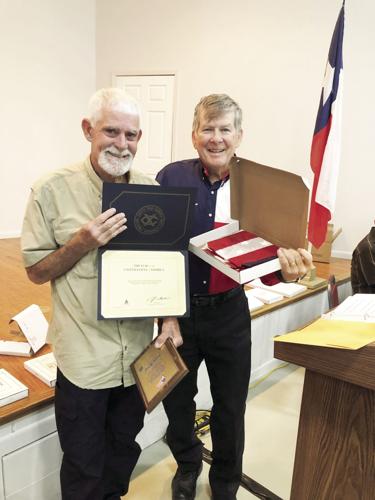 Thomas Bone was presented the Proudly We Hail Award for his display of the American flag during the Gatesville Exchange Club Golden Deeds Banquet on April 25. Pictured with him is Exchange Club President Alan Mathis. 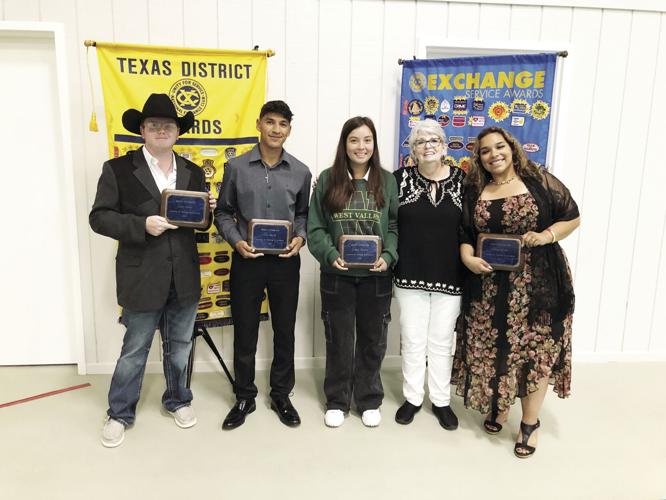 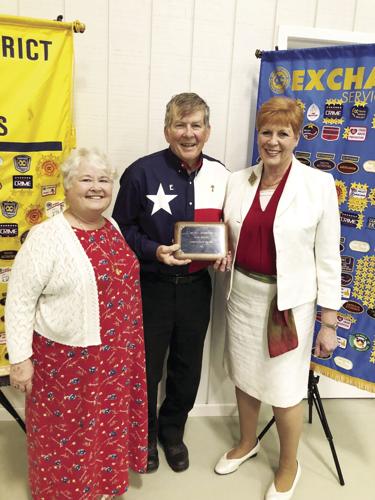 Alan Mathis, president of the Gatesville Exchange Club, was honored with the Senior Citizen Award at the Exchange Club's Golden Deeds Banquet on April 25. At left is Rosemary Mathis and at right is Helen Munday, administrator for Rehab Living Coryell Health.

"It's good to celebrate what a wonderful community we live in," said JoAnn Sugg, a member of the Exchange Club Board of Directors.

The first award presented was the Proudly We Hail Award, which went to Thomas Bone for his display of the American flag.

"He has over 26 years’ experience in law enforcement and has been in Gatesville since 2014," said Gatesville PD Patrol Lt. Georg Cleverley. "He counsels and mentors officers and is doing the work of two patrol sergeants with the retirement of another patrol sergeant."

The Firefighter Award was presented to Lee Walters, who has been with the Gatesville Volunteer Fire Department since 2013. He previously worked for a fire department in Maryland. Walters has worked as canine handler for the Texas Department of Criminal Justice.

"He is certified as a master firefighter and is the training chief for the department," said Gatesville Fire Chief Billy Vaden.

Sharon Inbody, who teaches health science classes for Gatesville High School, was Educator of the Year.

"She was selected by the students for this award," said Gatesville Independent School District Superintendent Barrett Pollard.

"He is fun loving, loves family, loves people and is very dedicated," said Exchange Club board member Helen Munday. "He is also involved in the Lions Club, American Legion, Silver-Haired Legislature, helps with the North Fort Hood Council, is a HAM radio operator and unloads food trucks for the Gatesville Care Center.

After 23 years in the U.S. Army, Mathis retired and then worked as a civilian military contractor in Iraq.

The Care Award for exceptional service and going above and beyond the call of duty went to Becky Coward, who is the County Extension Office's 4-H Youth Development agent.

"She has given exceptional service to children in our community, including my children, helping them become what they are today," said Coryell County Commissioner Kyle Matthews.

Students of the Year were Haley Lunesmann and Cooper Sutton. Lunesmann has served as the Texas Future Farmers of America District 8 vice president and attended the FFA national meeting in Indianapolis. Sutton was named to the Texas Academic All-State Football Team and was selected to participate in the Fellowship of Christian Athletes Heart of Texas Victory Bowl.

Macias "came to America for a better life and has excelled in academics and athletes," Sugg said. "He works at El Tapatio and has been accepted to both Tarleton State and Texas Southern."

Molina "was born to a drug-addicted mother which has resulted in health problems for her," Sugg said. "She has had lung problems and was raised by her grandfather. She is an excellent student and will be the first in her family to go to college. She was in the band all four years and has been accepted to Stephen F. Austin State University."

Kennon's family moved frequently "because of his father's addiction to drugs, and his grandfather stepped in to raise him, so he moved to Gatesville in junior high," Sugg said. "He helped care for his grandparents while attending high school, participated in FFA, has been accepted to Tarleton and wants to be a vet."

Pitrucha overcame a situation in which "both parents were incarcerated for drug abuse and child abuse," Sugg said. "She was in (Child Protective Services) custody for eight years before she was adopted. She has played volleyball all four years and has excelled in academics. She will attend McLennan Community College to become a vet tech."

Exchangeite of the Year was Clark Burns, for his volunteer efforts and consistent dedication to Exchange Club activities and ideals.

"They are dedicated volunteers who have over several years contributed to the community," Coward said during the presentation. "They have been co-owners of Valet Cleaners since 2012 and had hosted annual coat drives, sponsored youth sports teams, and Cody has coached flag football.

"They have also helped to sponsor numerous events including the Coryell County Youth Fair. They are leaders at Hay Valley Baptist Church and help lead youth activities and work with 4-H."

The Gatesville Swarm 14-U baseball team win a NCS title

Sorry, there are no recent results for popular images.